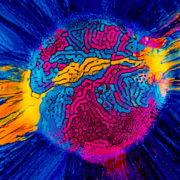 We live in the era of technological advancement where scientific contribution is the primary driving force of progress. Despite a rapid decrease in the distance between the achievements of science and their implementation in our daily life, it is still a widespread opinion that research is separated from reality and that scientists live in their own universe. To overcome this prejudice and fear of science, and to increase the general public’s willingness to trust and accept inventions, we have to find ways of efficient communication between scientists and society.

During my undergraduate studies, I was learning some abstract concepts in pure mathematics, so later on, when I started studying computational biology, I thought, “Wow! Now I am finally engaged in solving applied problems!”. The application of mathematics in the interdisciplinary field of Life Sciences fascinates me. And perhaps results of my future research could be used to either improve our understanding of diseases, or facilitate the creation of a new drug, or invent a new therapy. Who knows, right?

And while science is fascinating to us researchers, in a non-academic environment, the word “science” is often surrounded by mystery. It is associated with something distant and incomprehensible. This “fear” of science has a negative impact on society as it weakens the general credibility of scientific discoveries. This, of course, slows down the progress because new technologies’ success depends a lot on the public’s willingness to accept them. We, researchers, can help to reduce the general level of anxiety towards science by making it more inclusive and sharing our knowledge in an understandable form.

Lately, the concept of Open Science has started attracting significant attention from the scientific community, especially in applied fields. This movement aims not only to make research reproducible and accessible but also understandable to everyone, regardless of a person’s educational background. The more I dive into various scientific activities, the more I understand why it is crucial to efficiently communicate and disseminate science. News from the scientific world have to sound less like magic spells but more like intriguing stories*. How can we bridge this gap?

Art, being the universal language of emotions and senses, can serve as a mean of communication between scientists and the rest of the world. Perhaps, the ideas coming from science are easier to understand not logically but through emotions? At first glance, it may seem that science and art are absolutely incompatible. However, if you think about it, these two worlds — both abstract and creative — have a lot in common! They aim at exploring new horizons, providing another perspective on already existing things, and communicating this position to others. Moreover, scientists are often artists as well! A number of great inventors and scientists of the past — such as Leonardo da Vinci, Mikhail Lomonosov, Lewis Carroll, and many others — are known for their works of both scientific and cultural value.

From our side, we can contribute to the creation of things emerging on the edge of the two so different but at the same time so similar worlds. Within the ENHPATHY consortium, there is a program called Enhancer in Art that aims at communicating science (in particular genomics) to the general audience with the help of artists. I will soon contact an artist and tell her about my research. I expect it to be challenging mainly because of the need to “translate” some of the terms and concepts we use in our work to tell a fascinating and understandable story. My research focuses on studying the impact of gene regulatory variation on disease utilizing the concept of Variable Chromatin Modules (VCMs). I hope that in the final artwork, we could show the dynamic nature of the VCMs and the complexity of our genome organization.

* One of the examples that I find absolutely adorable is the series of coloring and comic books created by the Cell Press team: “Coloring with Cell” and “Color-In Comics: Neurons at Play”!

The (MSCA)-ITN the Innovative Training Networks program ENHPATHY to be launched on March 01, 2020

Science and art: the fusion of two universes
Scroll to top