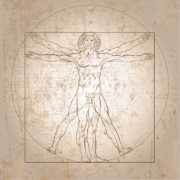 The picture linked to this article has not been chosen by chance. The “Vitruvian Man“ by Leonardo da Vinci perhaps represents one of the first encounters between science and art.
In this drawing, the great artist-scientist represents how the union between science and art is possible by placing the figure of a man symmetrically within geometric spaces defined as the circle and the square, respectively, Heaven and Earth.

Although the science-art partnership has its roots centuries ago, nowadays science does not enjoy the same understanding as art and it is seen by most as something mysterious.

Seen this, I wondered why.

It is a fact that science is a hard subject to understand, especially for the large number of concepts not owned by common people which cannot be found among the general knowledges of a country.

Well, actually I think that the “Enhancer in Art” (EIA) project within the ENHPATHY program can be a way to bring people closer to science, taking off that mystery dress it wears for common people. Making science more “popular” in its understanding could also increase people’s interest in it.

Plus, the EIA project will be a way to test us as young researchers.

Not by chance, the first difficult purpose will be to make our project and our research understandable to the artist who will follow us, using a language that is not as much scientific as direct. That is why, we would try to address him as friends, turning scientific language into a friendly conversation.

One of the articles I have recently read about science-art partnership published in Nature states that the collaboration between scientists and artists is the most valuable when these “have a shared stake in a project” which can help the scientist so much in stimulating new research work as much as the artist in creating something unique also leading to new career opportunities as desired by Virginia Gewin.

So, what do I expect from this project? My greatest goal is to try to get people feel what we, young researchers, feel about science and scientific research. The feeling, the emotion, the pride that we feel in contributing to the knowledge of a specific topic, hoping that it will be useful to the community.

And in this sense, I feel lucky to be able to tackle the EIA project in Marseille, a city with a deep sense of art, as it was the European capital of culture in 2013, which boasts a multitude of young local artists.

Epromoters: The regulation of gene expression is no longer a binary issue

Posted by Francesco Leonetti
Art vs Mystery of Science

Music in the context of Science
Scroll to top