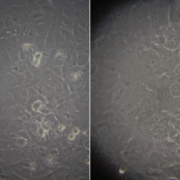 In the world of scientific investigations and innovative research, biomedical research offers a great many opportunities to contribute to improving both longevity and quality of life. An educational background in computer science and numerical computing intertwined with bioinformatics made me more conscious of the importance of the ENHPATHY initiative. ENHPATHY is not only an excellent research endeavour but also a significant step towards the humanitarian cause. During my stay in the UK, I was heavily involved in the COVID research on cancer patients with UK Coronavirus Cancer Monitoring Project (UKCCMP), which further motivated me to work towards health science and genetics-based research.

Congenital heart defects (CHD) are a varied group of structural and functional disorders that occur in the developing heart of neonates and children. CHD is the leading cause of infant morbidity and is prevalent in about 1-3% of all live newborns. Routine clinical diagnosis of CHD is often performed prenatally to examine the heart structure for defects in the walls, valves, and vessels. Surgical intervention and therapeutic management techniques for CHD have improved significantly over the last few decades and an early diagnosis and subsequent treatment have the potential to drastically improve perinatal outcomes. However, studies have found that a number of these CHD diagnoses are missed in the birthing clinic and thus infants are later diagnosed upon hospital admission for critical symptoms such as cardiac shock.

The advent of next-generation sequencing made prenatal genetic diagnosis possible. However, the underlying genetic architecture suggested that the causal CHD variants were found to be those identified on a family-by-family basis rather than identified statistically at a population level with GWAS (Genome-Wide Association Study). In conclusion, the theory of CHD aetiology became that many common variants, as detected by GWAS, add to the risk of CHD, but these exist alongside rare variants which carry a much higher contribution. Therefore, an unbiased whole-exome sequencing (WES) approach started to be utilized to identify rare causal sequence variants in familial or sporadic CHD cases. Unfortunately, due to poor diagnostic success rates of both CHD gene panels and WES, along with the limited genome-wide coverage of both methods, the focus is now turning to whole-genome sequencing (WGS) to investigate whether non-coding sequence variants can lead to an improved diagnostic yield for CHD.

Introducing SuRE and its potential role in new CHD variants identification

However, identification of variants is just the first step, major challenges lie within identifying causal variants amongst them. Due to the intricate spatial-temporal regulation of transcription-factor binding to non-coding cis-regulatory elements, the functional effect of these variants is not predictable just from the sequence. Functional assays are commonly employed alongside WGS to determine whether a variant has a functionally significant effect on gene expression. Survey of Regulatory Elements (SuRE) is a massively parallel reporter assay platform that can identify and assay novel promoters/enhancers at high throughput. Additionally, SuRE can assay CRE activity in any transfectable cell line and previous applications have found differing cell types to have unique regulatory profiles. We hypothesize that using SuRE technology, we would be able to detect some of these causal variants while establishing a database with millions of non-coding sequence variants – all functionally annotated for their effect on enhancer and promoter activity in several disease-relevant cell types. This database of non-coding sequence variants and causal variants would not only be a major accomplishment of the project but also an important resource for strategies aiming to link genotypes to phenotypes like the GWAS and eQTL (Expression Quantitative Trait Loci) studies.

Posted by Vartika Bisht
Welcome to my blog