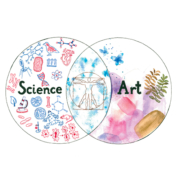 Even though we today usually see art and science as two different things, maybe they are not that different. Despite having different methods and traditions one thing binds them together: The motivation to understand and describe the world around us.

Visual art has been used for thousands of years to describe and document the world around us. From the cave drawings of animals to centuries-old paintings of the human anatomy. And really, were the painters mostly artists, scientists or were they both?

Both the artist and the scientist strive to see the world in new ways and to communicate that vision to the world. And for both artist and scientist, the combination of obtaining a new vision of the world and communicating this vision is critical.

One thing that may come to mind as a gab between art and science is the rule-based rigidity of science trying to solve problems and a more creative and open approach in the arts. But great science also has a big part of creativity and thinking outside the box in asking new questions to solve the problems and art has a lot of rigidity in aesthetic and composition.

Both good artists and scientists know the rules of their field, whether it is the rules of base paring in DNA or if it is creating the illusion of depth on a 2D canvas. However, they also know that in order to understand more of the world, sometimes these rules have to be bent and shaped into a new reality.

As a scientist, I think the scientific community often get caught in all the details of their research, instead of learning to focus on the core concepts. It is important to be able to go into the tiniest details of the science, however, it is equally important to be able to zoom out and focus on the bigger picture. Art can help scientists to visualize and communicate the core of their science instead of focusing on numbers and details. This is why, I believe the Enhancer in Art program created by ENHPATHY is a great opportunity for both scientists and artists to change the perspective of the world for their spectators.

The (MSCA)-ITN the Innovative Training Networks program ENHPATHY to be launched on March 01, 2020

Posted by Kaja Madsen
Science and art: the fusion of two universes